Ol Sarge gave me an idea from something he did on his blog today.  So, like the Chinese, I will steal his idea and reverse engineer it and claim I discovered it!! 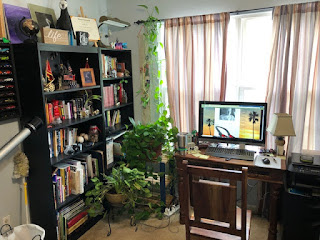 My current office...ype...this is where the magic happens.  Ever since I have been working from home, this is where I spend close to 8 hours a day.  And yes...the chair is not very comfortable.  Going to have to talk with the office manager about that! 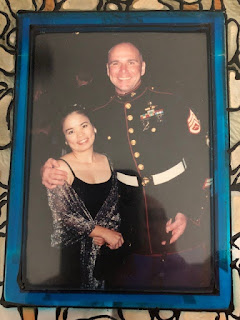 Me and the wife at the last Marine Corps Ball I attended as an enlisted Marine. 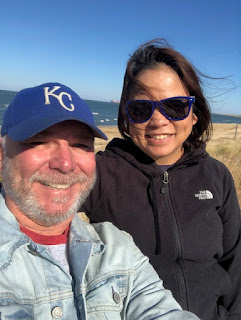 Me and the wife now, well before all this Wuhan bullshit started.  The beard is gone for the time being due to me having to wear a mask when I am on duty.  Duty for what you say? 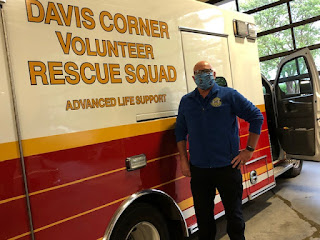 Got a new job that gave me some free time so I did something I always wanted to do....I became an EMT and now run as a volunteer in Virginia Beach (which has the largest volunteer EMT service in the United States). 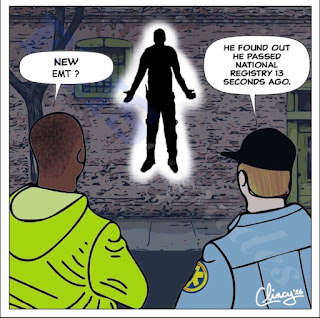 What it felt like when I found out I passed the National Registry Emergency Medical Technicians test!! 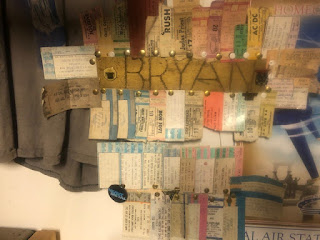 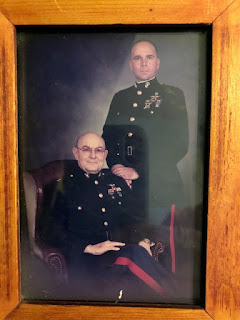 My Dad was a Marine Aviator.  He flew damned near every aircraft the Corps had in its inventory between 1956 and 1976.  His hands down favorite was the FJ-4 Fury.  Called it an "airborne hot rod."  When he found out I get selected for Warrant Officer he started a diet so he could fit his Dress Blues so we could take this picture.  First time in 25 years he had put them on!  Unfortunately, he passed away 2 years after this picture was taken.  He blamed the Agent Orange he was doused with constantly while in Vietnam.  I miss him everyday. 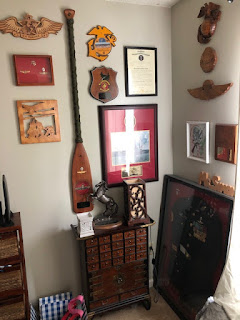 My little "love me" corner! the large framed shadow box on the right is my retirement plaque from the Marines that worked for me.  It is a set of enlisted blues and officer blues sewn together.  The right side of the uniform has all my enlisted rank and the white belt and ribbons.  The left side is my officer side with all my medals and badges. 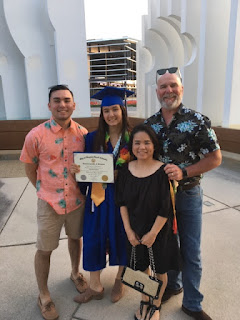 The family unit at my daughters High School graduation.  My son is a Spec4 in the Army, getting out next month.  He joined right after graduating High School.  Smart kid, is a Satellite Communications Operator/Maintainer.  He wants to me a Software Engineer.  My daughter has been going to the local community college and just got accepted into her dream school: Virginia Tech for the fall semester.  She is studying art.  She is very talented and has been since she has been able to hold a pencil in her hand.  My wife is a Tiger Mom bar none!  She runs herd on this family.  She is everything to me and I have no idea what I would be without her.

Well, that gives you an idea of who you are talking to.  One lsat pic: 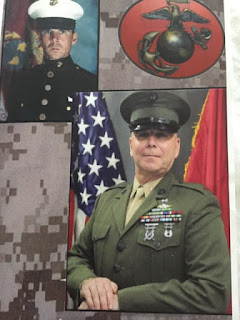 From Infantry/Recon Private to CWO4 Embarkation Officer in 21 years.  There is truth to the old Joan Jett and the Blackhearts song "Glorious Results of a Misspent Youth"!!

Civil War, President McKinley, and the importance of coffee in war.

It was the greatest coffee run in American history.

The Ohio boys had been fighting since morning, trapped in the raging battle of Antietam, in September 1862. Suddenly, a 19-year-old William McKinley appeared, under heavy fire, hauling vats of hot coffee. The men held out tin cups, gulped the brew and started firing again. “It was like putting a new regiment in the fight,” their officer recalled.

Three decades later, McKinley ran for president in part on this singular act of caffeinated heroism. 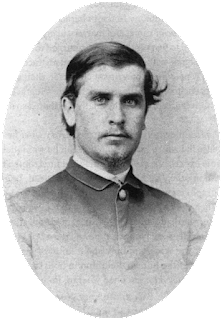 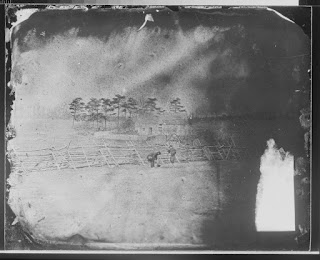 But more than that, coffee was simply delicious, soothing – “the soldier’s chiefest bodily consolation” – for men and women pushed beyond their limits. Caffeine was secondary.

Soldiers often brewed coffee at the end of long marches, deep in the night while other men assembled tents. These grunts were too tired for caffeine to make a difference; they just wanted to share a warm cup – of Brazilian beans or scorched rye – before passing out.

This explains their fierce love. When one captured Union soldier was finally freed from a prison camp, he meditated on his experiences. Over his first cup of coffee in more than a year, he wondered if he could ever forgive “those Confederate thieves for robbing me of so many precious doses.” Getting worked up, he fumed, “Just think of it, in three hundred days there was lost to me, forever, so many hundred pots of good old Government Java.”
So when William McKinley braved enemy fire to bring his comrades a warm cup – an act memorialized in a stone monument at Antietam today – he knew what it meant to them. 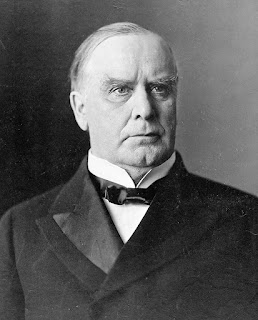 25th President of the United States....William McKinley.
First elected in 1896.  Re-elected in 1900.
Assassinated in 1901 giving rise to Theodore Roosevelt 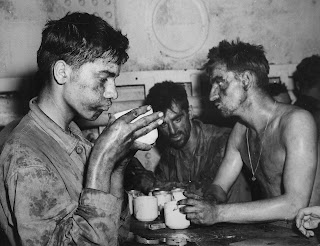 Upon their return from Makin Island to the submarines USS Nautilus and the USS Argonaut ....Marines of the 2nd Raider Battalion enjoy a well deserved hot cup of coffee.

The mission, although deemed a success, was fraught with problems: boat motors refused to run making them break out the paddles, high surf tossed them like bathtub toys, intelligence failures on make up of enemy forces were just a few.

Once ashore, communications between LtCol Carlson and his unit commanders was non-existent due to the radios being soaked in saltwater during the movement ashore.

During the confusing movement from the island back to the submarines, 12 Marines were left behind.  Those Marines were found and executed by the Japanese, including Sgt Clyde Thomason, the first enlisted Marine to be awarded the Medal of Honor in WWII.

Bravery was not in short supply on that island those two days: in addition to Sgt Thomason's Medal of Honor, 23 Navy Crosses were also awarded.

The Nation rallied around the Raiders exploits and that ensured their legacy and near mythical status within the Marine Corps forever.

Copied from elsewhere....but sums up my sentiments exactly:

Some of you are allowing fear and policies devoid of scientifically
accurate data to destroy America and ruin your life.

I can't control your self-destructive behaviors, but we all have a say in America.

We need to tell legislators that we demand options. We have a constitutional
right to take risks.

Life is full of bacteria and viruses--many of which spread
before symptoms manifest and after they subside.

We have a right to receive OR refuse vaccines.

When the "new normal" is filled with starvation, depression, suicide,
imprisonment, governmental spying, and pure DESPERATION, the
virus is going to look preferable to the world you helped facilitate.
Posted by Coffee Man at 5:06 AM 1 comment:

I  was perusing another blog and he pointed out something....today is the anniversary of the first shots of American freedom in Lexington.  The vast majority of us were sleeping when the time 0520 EST came and went that our forefathers basically told the English King to pound sand.

The men, who the day before were plowing their fields or tending their shops, dropped everything to start a revolution.   The went against professional soldiers of the most powerful  nation on earth at the time.   Farmers, shop keepers, men who longed to shed the yoke of tyranny for an ideal....that all men were granted by their Creator certain inalienable rights: Life, liberty, and the Pursuit of Happiness.

I have traced my family history on my Mothers side back to a number of time great grandfather that fought in the War of 1812 and was given a land grant in western New York (Nunda) for his participation.

So as we sit in our homes fighting a new fight, if you have one, hoist a beer to those brave men who that day showed the world America was its own. 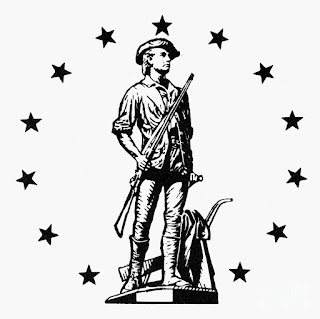 Posted by Coffee Man at 6:13 AM No comments: 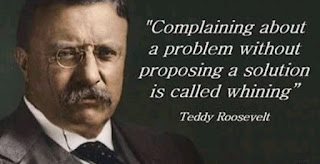 Why I’m a Conservative

The biggest reason I’m a conservative is because I like to use my own my mind. I refuse to be boxed in a mode of thinking that dictates what I’m supposed to be prior to my birth.

I saw this on the "Last Tradition" blog and does a pretty good job of summing up my feelings exactly, but not all.  Let me add:

I was taught since childhood to stand on my own two feet, that nothing in life is free except that which you work for.  Everything given has strings attached.  It gives me a solid feeling inside when I look around and know that I earned everything I have...no silver spoon here.

I am responsible for my actions and take full credit for that which I have done.  I pay attention to the law and have the upmost respect for those that wear the uniforms that keep us safe, I wore one of them for over 21 years and now wear another; I continue to serve.

I am grateful for my health, my family, and the blessings that have been bestowed on me by my Creator and through my hard work.
Posted by Coffee Man at 10:11 AM No comments:

Quarantine is when you restrict movement of sick people.

Tyranny is when you restrict the movement of healthy people.
Posted by Coffee Man at 10:24 AM No comments: