With hope of reconciliation fading away at the opening of 1776, in June, Richard Henry Lee of Virginia, offered a resolution in the General Congress declaring all allegiance of the colonies to the British Crown, at an end.

With that offered resolution, the work began to sever the ties the bound the Colonies to the Crown.

A committee was formed to draft the declaration: Thomas Jefferson (of Virginia), John Adams (of Massachusetts), Benjamin Franklin (of Virginia), Roger Sherman (of Connecticut), and Robert R. Livingston (of New York).

The declaration was completed on 28 June and presented to the Congress.  It laid on the table until 01 July.  It was taken up by a committee of the whole and, after several amendments were made, nine States voted for Independence.

The Assemblies of Maryland and Pennsylvania refused their concurrence; but conventions from the states were recalled, majorities were obtained and, on the Fourth of July, votes from all the Colonies were counted, and the thirteen united Colonies were declared free and independent States.

The Declaration was signed that day, only by John Hancock, the President of the Congress, and with his name alone it was sent forth into the world.

On the morning of the adoption, the bell-man ascended the steeple with a little boy stationed at the door of the hall to give him notice when the vote was concluded.  The old bell-man waited long in the bell tower saying 'They will never do it."  Suddenly, a loud shout came from below, the little boy jumping and clapping yelling "Ring!  Ring!"  The bell-man grasped the iron tongue of the bell, hurling backward and forward 100 times, proclaiming "Liberty to the land and to the inhabitants thereof."

On the 2nd of August, the Declaration of Independence was signed by all but one of the 56 signers.  That one was Matthew Thornton (of New Hampshire), who upon taking his seat in the congress in November, asked for and was granted the privilege of signing the document.

The signing of that instrument was a solemn act, and required great firmness and patriotism in those who committed it.  It was treason against the home government, yet perfect allegiance to the law of right.  It subjected those who signed it to the danger of ignominious death, yet it entitled them to profound reverence of a disenthralled people.

Posted by Coffee Man at 4:43 PM No comments:

Been quiet round these parts lately.......

Well, it has been quiet.  I changed jobs and this new one has me jumping.  I am doing things I "thought" I had done before but apparently not.  It is different being a Program Manager and having to fly a desk than being the Superintendent out there on the deck plates making things happen.  i figure i have about 3 1/2 more years of this in me.  Why you ask?  I turn 62 in 3 1/2 years and I am done doing this.  I won't quit working...that leads to an early grave.  i am just not going to do ship repair anymore.

Truth be told, it is the last thing in the world I wanted to do when I retired from the Marine Corps.  The agreement between me and the commander in chief (wife unit #1) was that upon retirement, we would move to where the job was.  I did not get the memo apparently because i soon found out that the job was here...she wasn't moving.  Who would have thought that 8 moves in 10 years would do that to someone?!?So, after 3 very frustrating months of job searching.....ship repair it was.  I got to admit...it is a steady career.  The US Navy breaks them faster than we can put them back together.

So, enough about that nonsense.  I was perusing the used books for sale at the local DAV thrift store and came upon a reprint of a book written in 1848.

The original title of the book is "Biographical Sketches of the Signers of the Declaration of Independence: the Declaration Historically Considered; and a Sketch of the Leading Events Connected with the Adoption of the Articles of Confederation and of the Federal Constitution." by B.J. Lansing. 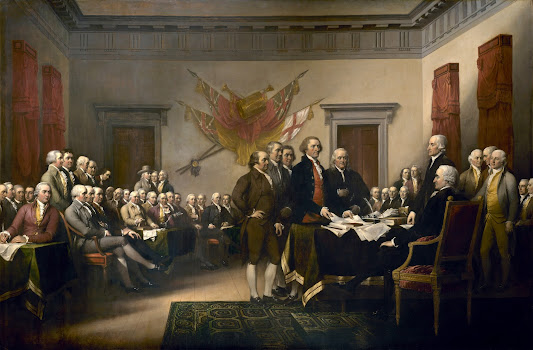 The Signing of the Declaration of Independence.
(not exactly how it went down I am reading)

Have you ever noticed that titles of books from back then have LONG titles?  It is almost like they invented dust covers for books so they could print a brief synopsis of the book on the flap instead of having these long titles on the cover!

Either way, I thought to myself "What a great thing for a post on my long ignored and suffering blog....I will read this book and write a brief paragraph or two about each of the signers: what they did before signing and what happened to them after they completely and thoroughly pissed off King George III with their impudent behavior. 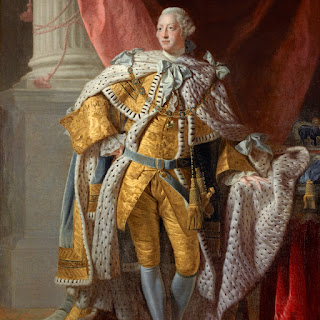 Aside from giving me something to do, it will provide all 3 of the readers of this blog with some insight to how the signers of the declaration faired after basically telling the most powerful nation in the world at that time to pound sand.  Did they lose their fortunes?  Were they hunted down like treasonous swine and imprisoned?  I suppose you will have to wait for the answers to those and other burning questions until next time.  I will endeavor to provide my dear 3 readers with prompt updates as I read this book.  So...stay tuned.