Thank you AFSarge!  You are the first person to ever reply to a posting on this sorry excuse for a blog!!!

Gotta relay a funny story, coffee related of course, about an incident on board the USS Juneau (LPD 10) in 2003.  I was serving as the Combat Cargo Officer at the time aboard that mighty vessel.

A little background:  when anyone embarks aboard a Navy ship, there is a "tax" that must be paid.  This "tax" is paid for in bodies.  You cannot load a ship with over 600 Marines without having to bump up the numbers of personnel taking care of little things, like laundry, chow, a guard force etc.

So, there were three mess areas aboard the Juneau, the Wardroom (officer dining), the Chiefs Mess (E-7 and above) and the mess decks (E-6 and below).  Each has requirements for bodies to assist in the duties.

So a young LCpl (E-3) Marine, we will call him Smuckitelli, was assigned to the Chiefs Mess as an attendant.  His duties included serving chow, and cleaning up.  On board the Juneau we had a crusty, and I do mean crusty, old Master Chief (E-9) that had been in the Navy since Jesus Christ himself was striking to be a Bosuns Mate.  Master Chief Crusty had a coffee cup.  This coffee cup had been given to him by a Master Chief back when he had been promoted to Petty Officer 3rd Class (E-4).  And, from the looks of it, that coffee cup had never seen a wash rag in all those 27 years of ownership.  It had so much tar built up on the inside, I would swear that it held about a thimble full of coffee.

One day, when Smuckitelli had finished all the required cleaning, he saw said coffee cup sitting in the cup holder and decided that it needed to be cleaned and scrapped clean.  And he did.  Apparently, from what I am told, he worked on that cup for over an hour getting it sparkly pearly clean white.

Lunch rolls around and Master Chief Crusty comes into the mess and immediately heads to the coffee cup rack to fetch his cup.  As an officer I was not allowed in the Chiefs Mess but the Gunnery Sergeant (E-7) that worked for me was in there when the incident took place.   Master Chief took his coffee cup out of the rack and just stared at it for about 30 seconds.  The roar that came from him was likend to that of a Valkyrie swinging into full battle mode.  He screamed at the top of his lungs "WHO THE FUCK TOUCHED MY COFFEE CUP?"  All the mess men behind the counter stood there and looked at Smuckitelli.

Had it not been for the extremely quick actions of my Gunnery Sergeant and a few of the other Chiefs, Smuckitelli would be swimming with the fishes to this day.  They restrained Master Chief Crusty and hustled Smuckitelli out of the Chiefs Mess and hid him for the rest of the deployment, up in the Wardroom. 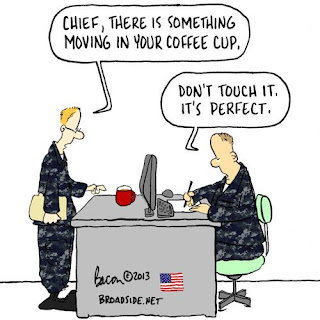 This is an edit...along the lines of delete everything I wrote and start again.  Things have been building up in me over this whole Wuhan, Chinese, Corona Virus thing (pick your description) and the Federal Governments response to it.

I do not want to be a blogger that talks about such things.  Too many out there already.

I will stick to what I know....coffee.  Where would we be if it had not been for those herdsmen that saw their goats eating those beans, taking them to the local Bishop to see what the Church thought, the Priests throwing the beans into a fire, being overcome by the roasted smell of the beans and brewing up that first delicious brew?

My world would not be the same.  Of course if none of that ever happened, how would I know I was missing it?  I would know...because somewhere deep, there would be a hole that would not be filled.

Thank you for that hot (even cold) brew I have come to depend on more than ever every day.  Especially now a days!!