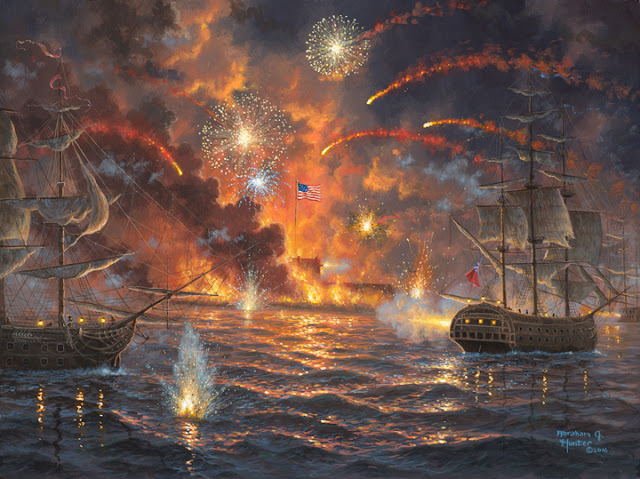 At sunrise on September 13, the British ships in the harbor began to shell Fort McHenry. Sturdy vessels, called bomb ships, carried large mortars capable of tossing aerial bombs. And a fairly new innovation, Congreve rockets, were fired at the fort.
The "rocket's red glare" mentioned by Francis Scott Key in "The Star-Spangled Banner" would have been the trails left by the Congreve rockets fired from British warships.
The military rocket was named for its developer, Sir William Congreve, a British officer who was fascinated by the use of rockets for military purposes encountered in India.
The Congreve rockets are known to have been fired at the Battle of Bladensburg, the engagement in the Maryland countryside that preceded the burning of Washington by British troops.
One factor in dispersing the militiamen in that engagement was their reputed fear of the rockets, which had not been used before against Americans. While the rockets were not terribly accurate, having them fired at you would have been terrifying.
Weeks later, the Royal Navy fired Congreve rockets during the attack on Fort McHenry during the Battle of Baltimore. The night of the bombardment was rainy and very cloudy, and the trails of the rockets must have been a spectacular sight.
Francis Scott Key, an American lawyer involved in a prisoner exchange who became an eyewitness to the battle, was obviously impressed by the rockets and incorporated the "rocket's red glare" into his poem. Though they became legendary, the rockets had a little practical impact during the bombardment.
In the fort, American troops had to patiently wait out the bombardment, as the fort's guns did not have the range of the Royal Navy's guns. However, at one point some British ships sailed closer. American gunners fired upon them, driving them back.
It was later said that the British naval commanders expected the fort to surrender within two hours. But the defenders of Fort McHenry refused to give up.
At one point British troops in small boats, equipped with ladders, were spotted approaching the fort. American batteries on shore opened fire on them, and the boats quickly retreated back to the fleet.
Meanwhile, British land forces were unable to make any sustained attack upon the fort.
On the morning of September 14, 1814, the Royal Navy commanders realized they could not force the surrender of Fort McHenry. And inside the fort, the commander, Major Armistead, had raised an enormous American flag to clearly demonstrate that he had no intention of surrendering.
Running low on ammunition, the British fleet called off the attack and began to make plans to withdraw. The British land forces had also been retreating and marching back to their landing spot so they could row back to the fleet.
The National Anthem "The Star Spangled Banner" is not about freedom.  To me, the song means that as Americans we never give up, we never surrender no matter the odds against us.  Remember the days after the 9/11 terrorist attack?  I was stationed in Japan at the time but even from there it was plain to see that the citizens of the United states had put aside their differences and all became AMERICANS....pissed off Americans, but one people united against a threat.
I love that America, just not what it takes to become that America.  But, any adversary should note that we, as Americans, love to fight.  If we are not fighting some thing on the outside we fight amongst ourselves.  And as more than a few adversaries have learned, if someone attacks us, it is the fastest way for us to have our attention diverted away from our internal squabbles and laser focused on them.  Those  who have not studied history and have not learned that face a serious learning curve if they ever feel froggy.
Posted by Coffee Man at 4:53 AM

Love this! I will link to it tomorrow.