WWII continues to fascinate me....

I am not sure whose blog I was reading (sorry...would give credit but I forgot!) and came across a story that seemed to fantastic to be true.  This story is about the pilot of a Piper L-4 Grasshopper observation plane that actually figured out how to, or convinced his crew chief to do it...however he did it...he installed 6  M1 Bazookas (2.36 IN rocket launcher) to the wing spars of his slow moving, low flying observation plane!  Not only did he install them, or had them installed, but he actually killed Nazi tanks with them!  He, Charles Carpenter, actually became an "Ace" at killing tanks having been creditited with 6 kills!

I am blown away by the sheer audacity of the times.  I mean, there was Cpl Tony Stein who took 6 AN/M2 .30 cal machineguns off a wrecked aircraft, fitted them with stocks and took them into battle on Iwo Jima.  There is Sgt Curtis Cullen who started welding bits of scrap metal to the front of tanks to enable them to plow through the hedgerows in Normandy.  A General saw how effective this was and soon every tank had this modification.  Then there Charles Carpenter who made a anti-tank aircraft out of a lightweight observation plane.   And these are just a few examples!!

Can you imagine the brass these days if someone did that these days?  There is the story of the guys that began fitting acrap metal around the machineguns on top of HMMWV's during Iraq where none used to be ad being told to remove it by ranking officers no matter how good it protected the gunners because it was not "tested and approved". 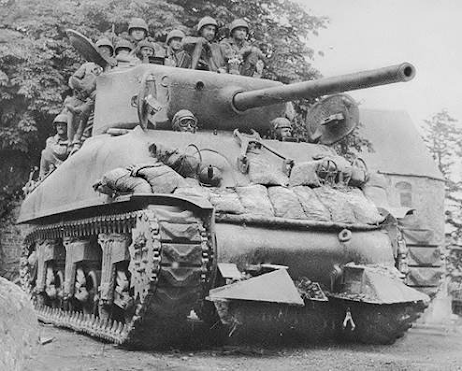 Sheridan tank fitted with a Hedgerow Cutter designed by Sgt Curtis Cullen
https://ww2today.com/9-july-1944-the-culin-hedge-cutter-on-the-normandy-battlefield
If there is one thing that Americans are is inventive and resourceful.  If there is a problem, we figure out a way to remedy it.  And to stifle that sort of innovation is counter to everything I was ever taught about being an American.

Unlike now, most people had both courage and common sense back then.

NICE POST
As you have said that, There is Sgt Curtis Cullen who started welding bits of scrap metal to the front of tanks to enable them to plow through the hedgerows in Normandy.
------------------------------
Bellen Google Nederland