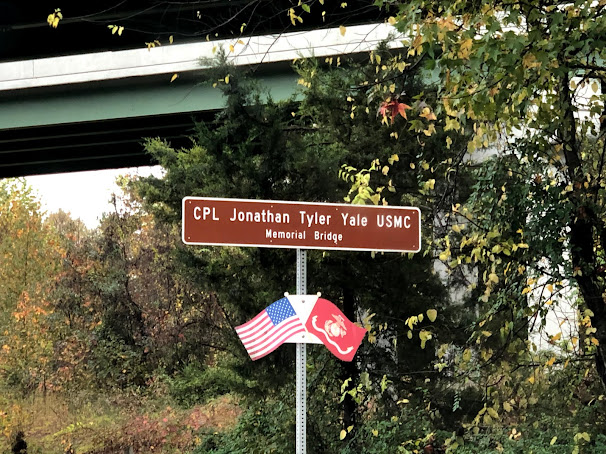 I was returning from visiting my daughter at her college and was in rural Virginia on the way home and saw this sign as I passed by.  i tried to stop but there are no shoulders and it is right in an area that narrows from two lanes to one and I had two cars behind me.  I circled around and slowed up so I could get a picture of this sign.
Cpl Yale was a mixed race kid from rural Virginia.  He and his partner LCpl Haerter were standing post at Joint Security Base Nassar in Iraq in 2008.  What they did in the final six seconds of their lives was caught on video.  In their actions, they saved the lives of over 50 Marines and 100 Iraqi policeman they were training and patrolling with.
General John Kelly was the Marine in charge of all Marines in Iraq at that time and the man that nominated them both for the Navy Cross.  Here is what happened in his words:
https://www.youtube.com/watch?v=PvKo6SK-Jwc

Thank you. I will always watch again

It was a pair of brave men that knew exactly what was coming and did their job to the best of their ability. I still remember a near terminal fight with my little brother about what the word hero actually means.

The word is seems so watered down these days. But when you see it right in front of you, or in this case a video of the action, you truly know the definition of it.