So, I shamelessly "stole" this from another blog (I am sorry I do not remember who from though).  And it got me to thinking....how many other funny stories are out there with regards to these behemoths of the sea?  Well, I looked into it and found a few.  First, the meme that started my quest: 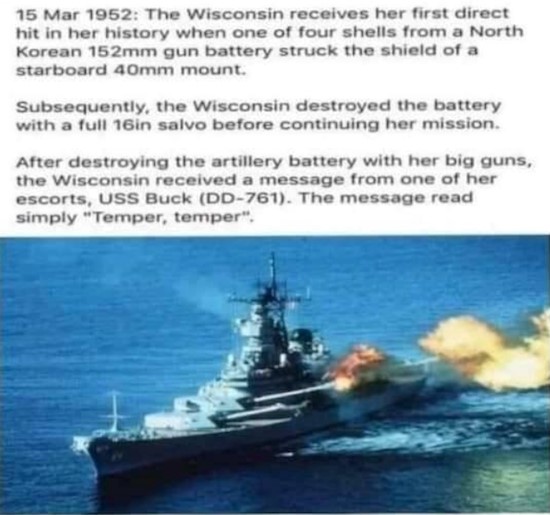 "There was a Chief Steward, who for a while started giving nothing but bologna.  Someone told the Captain that they were going to throw him overboard.  The Captain assigned a Marine orderly with him for a while who followed him around for a few weeks.  They finally changed the menu."
"Never having been on a battleship and never seeing 16 inch guns fired, I was interested when we went to the gunnery range to fire our guns.  I stood behind the #2 mount to watch.  They fired a salvo and I did not have a hair on my face or arms.  I wound up in sick bay for burns and a reprimand."
"We were allowed beer on board to be doled out at the rate of 2 cans per man on beach party liberty.  We were in Noumea when beer was authorized and pressure was on me to get some of it.  I called in my two top Chiefs and told them I wasn't getting the beer because I did not think there was a place on the ship where it would be safe from pilferage.  They thought it over and came up with storing it in the brig.  "We do not use the brig to much anymore so why not lock it up there?"  We will pass the word that hte first SOB that draws brig time will cause all the beer to be thrown over the side."  They added that they would see that culprits could be taken care of other than being taken to Captains Mast where the punishment was brig time.  I bought their suggestion and we had amore than a few black eyes once in a while but no lodgers in the brig for months to come!"
"I was a Gunners Mate striker.  Several times I was asked to put on the monkey suit (coveralls).  The first step was to get two lines from the chamber all the way through the (16-inch) barrel.  We would then use a hammock for me to lie on.  We would secure a line to each corner and tie a rag around my head and I entered the chamber feet first.  Someone would pass me a large rag with about a pound of grease.  When I was ready the men on the deck would start pulling me through and I used my hands to spread grease round and round the barrel.  I was glad when my feet came out the other end!"
From a sailors diary:  "On July 9th and 10th (1945) we kept up continuous attacks on the home islands.  We were very much surprised by the lack of opposition.  No enemy air attacks at all even though we announced our presence by running lights at night and no radio silence.  On July 17th we (US North Carolina BB55) made a bombardment on the Hitachi Industrial Complex.  The bombardment was made at night.  This is what we've waited two years to do.  We can go home now.  We've done it all out here.  The rest will be repetition."
"I was below deck when the Captain announced the war was over.  Boy, you talk about a roar that went up!  I think the whole ship jumped about two feet out of the water!!  Admiral 'Bull' Halsey passed the word throughout the fleet that 'Apparently the war is over, though nothing has been signed yet.  So in the meantime, if any enemy aircraft come in your area, shoot them down in a friendly manner..."

I especially enjoyed the last one. ;-)

My favorite story was from my CO, a frocked LCDR back when we did that for 1200 pound steam CHENGs. He related as how he was CHENG on an ancient DD when a new nuclear cruiser insolently invited the old destroyer to try to remain within visual signaling distance during its full power trials. It promptly scrammed the reactor and the DD raced for the horizon only to get there and send a flashing signal to the cruiser that it was 'slowing down to remain within visual signaling distance.'